10 Aug Could a World War II Shipwreck Cause the Next Beirut-Like Explosion?

THE SS RICHARD MONTGOMERY IS BASICALLY A BOMB WAITING TO GO OFF. 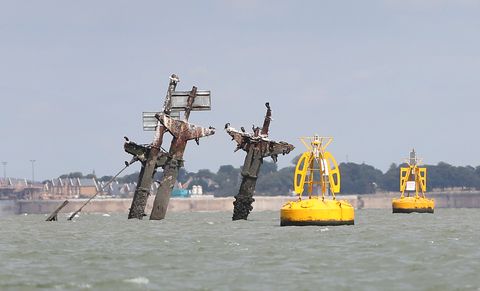 An American cargo ship that accidentally sank off the coast of London during World War II could cause a major explosion rivaling that of the devastating blast in Beirut earlier this week.

In August 1944, the SS Richard Montgomery, a ship ferrying supplies back and forth to Europe after the D-Day invasion, sank at the mouth of the Thames River on the sea approach to London. Authorities are prepared to cut the ship’s mast to make the ship safer, but even that might cause the ship to explode—with devastating consequences.

The Richard Montgomery was one of 2,711 so-called “Liberty Ships” constructed in American shipyards during World War II. Simple to build and capable of carrying more than 10,000 tons of cargo, Liberty Ships became the backbone of the supply war against the Axis powers during World War II, supplying Soviet, British, and American forces around the world.

Before she sank, the Richard Montgomery was awaiting a convoy heading to France and had taken up position at the mouth of the Thames River. She was loaded with 6,000 tons of supplies and munitions waiting for the U.S. Army in France when she suddenly ran aground. Stevedores managed to get 4,500 tons of equipment off the ship before she snapped in two and sank, but another 1,500 tons remained.

The ship has sat virtually untouched for the last 76 years. Although it’s considered stable, authorities warn that attempts to interfere with it could cause it to explode. The remaining 1,500 tons of munitions could cause an explosion even bigger than the one in Beirut.

While the Richard Montgomery is more than a mile from shore, Forbes warns an explosion would cause a mini-tsunami between 4 and 16 feet high, shatter windows for miles, and have a devastating effect on passing ships.

Authorities in the past have said the wreck is relatively stable, but a recent survey points to a new danger. They now believe the ship’s mast, sticking out from above the water line, is straining the wreck and could cause it to explode. Plus, attempts to shorten the mast to relieve some of the strain could cause the ship to explode.

If you would like to forward us any tender information, or discuss your project with us, please call us or alternatively fill out our contact form.